Warning: count(): Parameter must be an array or an object that implements Countable in /home/customer/www/momwithanasterisk.com/public_html/wp-content/themes/mariana-handmade/includes/lists.php on line 422
 PCDH19 Epilepsy - Mom*
Mom* 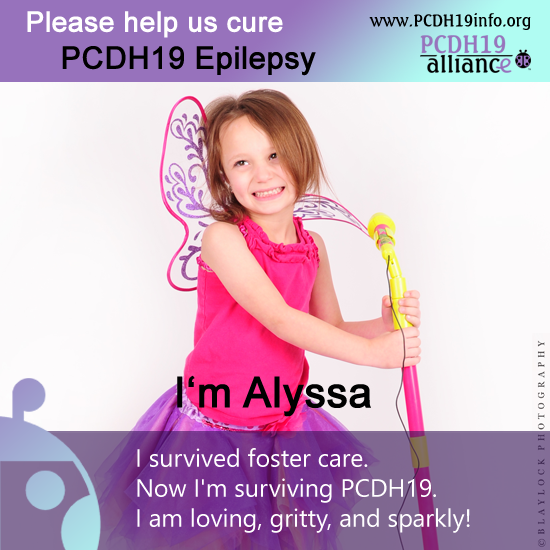 My daughter, Alyssa, has PCDH19 epilepsy.  This particular brand of epilepsy is a genetic disorder.  Since she was adopted, we are not sure if it was passed down by one of her birth parents or if her case was de novo, meaning that it was a random mutation.  When she was diagnosed, there were only a few hundred girls on the planet who were known to have this disorder.  As research has progressed and more patients have been tested, it is now estimated that 1 in 10 girls who start having seizures before 5-years-old have PCDH19.

It could be that you are here because you, your daughter, or someone you know has PCDH19.  Maybe you want to just want to learn more about it and the amazing breakthroughs in research that we are making every day. The best source of information is the PCDH19 Alliance but allow me to share a few of the most important things you need to know too.

One hallmark sign of PCDH19 is that the seizures tend to come in clusters.  Girls may go for a time without seizures but then have many seizures at once.  When Alyssa has seizures, she tends to have one every hour until the hospital can get them stopped.  We are rarely able to get a cluster to stop at home with only emergency medications.

PCDH19 is more than just seizures.  Most girls have behavioral or cognitive challenges and about 30% of the girls have autism as well.  Sometimes they have these challenges their entire lives but often the challenges increase with age.  Alyssa gets a neuropsychological evaluation every year so that her doctors can chart her cognitive abilities and intervene more if she falls farther behind.  She also has an IEP at school so that they can help her learn in spite of the hurdles she faces.

Sometimes we struggle more when there aren’t seizures.  During a cluster, we have a medical plan to follow and a great children’s hospital to lean on.  When the seizures aren’t as prevalent, the other issues start to be more noticeable.  Deficits that we hoped were just a result of seizures start to look more permanent and meltdowns are exhausting for the entire family.

PCDH19 is often intractable. That means that the seizures cannot be controlled with medications or that the person must take more than three medications to keep them at bay.  Alyssa takes five medications every day and has three more that she gets as needed.  About a third of people with epilepsy are not able to control it with medications or medical interventions like surgery.  When a person’s epilepsy is intractable, they are at an increased risk of SUDEP which stands for Sudden Unexpected Death of someone with Epilepsy.

Researchers are making amazing advances every day.  I am honestly excited about what scientists around the world are doing to give Alyssa a better future.  From genetically modifying zebra fish to new drug trials to a registry that tracks our girls’ outcomes, we are making progress at an astounding rate.

We don’t know the future.  Some girls have seizures when they are young but seem to grow out of them. Others have seizures for their entire lives.  Sometimes puberty can wreck havoc on our girls’ bodies and cause more severe clusters than they have ever had before.  We live our lives with a monster in the corner who is always waiting to jump out and destroy our family.  We have hope that our daughters will win but sometimes hope is all we have.

If you would like to learn more about PCDH19 or if you are a parent needing resources, please visit my friends at the Alliance.  They have been a tremendous help to me and my family throughout this journey. They provide research and family grants, information, advice and an understanding shoulder.